The Kaliningrad Region is a unique region of Russia. Region is located on the southeastern coast of the Baltic Sea and is the westernmost region of the Russian Federation completely separated from the rest of the country by the land borders of foreign states and international sea waters.

With its small territory, Kaliningrad region is characterized by special natural conditions. A strip along the southern ice-free part of the Baltic Sea, which is a humid lowland plain with mild winters and a cool summer - these are quite favorable natural conditions of the region. 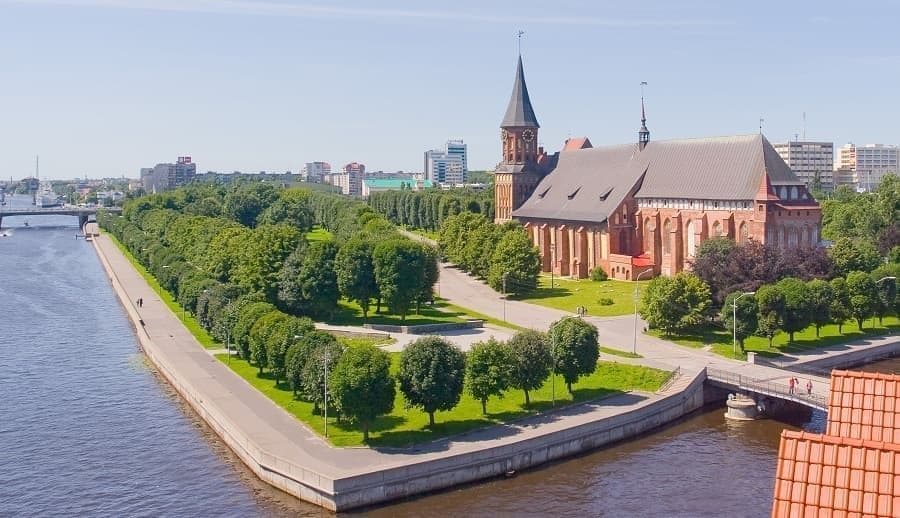 The history of the Kaliningrad region is unique and it goes back to the pagan tribes of the ancient Prussians, later captured by the German (Teutonic) order. After centuries, this land becomes the cultural center of East Prussia.

The territory of the present Kaliningrad region was inhabited for a very long time. For a long time tribes of Prussians lived on this land. Prussians engaged in farming, fishing, trade and were skilled artisans. By the beginning of the thirteenth century, there were approximately 250,000 Prussians.

The Prussians were belligerent and often successfully raided Poland. However, Polish kings and princes repeatedly invaded Prussia. However, the Poles themselves could not subdue the Prussian, and in 1226 the Polish prince Konrad Mazowiecki invites the Teutonic (German) order to fight the Prussians. Of course, the knights enthusiastically went to conquer the pagans of the Prussians.

As support points, the Crusaders built castles, some of which later became cities. Thus, in 1255 they founded the fortified city of Koenigsberg, which became the capital of the region.


Many Prussians died in the struggle, some fled to a relative of Lithuania, Poland and Russia. The Prussians who remained under the authority of the Order were baptized and enslaved. The Germanization of the Prussians began. Since many of the Prussian lands were depopulated after the conquest, immigrants from Germany fled to the possession of the Teutonic Order. By the end of the 17th century, the Prussian language as such had disappeared, the descendants of the Prussians finally became Germans.


The German Order rules these lands until 1525. It was a powerful and aggressive state. However, constant wars with neighbors led to the fact that the Order in 1525 was dependent on Poland and was secularized by the last master of the German order, Albrecht of Brandenburg, who was the ancestor of the secular duchy. The Prussian Duchy became the first state formation where Lutheranism was introduced.

In 1657, the Prussian Duchy was freed from dependent dependence on Poland, and in 1701 the Elector of Brandenburg, Frederick III, was crowned as Frederick I, as a result of which Prussia became a kingdom.

In 1756, the Seven Years War began, during which, on January 11, 1758, Russian troops entered Koenigsberg. The inhabitants of Prussia swore allegiance to the Russian empress Elizabeth.

Until 1762 the city belonged to Russia. In 1762, after the Russian Tsar Peter III concluded a peace with Frederick, Prussia was again returned to the German crown.

After the partition of Poland in the XVIII century. Prussia received part of the Polish territories. Since that time, the territory on which the Kaliningrad region is now located, has come to be known as East Prussia.

At the beginning of the XIX century, Prussia and Koenigsberg came hard times. The earth became the arena of fierce battles. In 1806-1807 the Russian troops as allies of Prussia fought in this region with Napoleonic troops. In East Prussia battles raged at Preysish-Eylau (now Bagrationovsk), Friedland (Pravdinsk). Military operations ended in peace, signed in Tilsit (now Sovetsk).

The end of the history of German East Prussia was laid by the World War II.

In October 1944, Soviet troops entered the territory of eastern Prussia. Fierce fighting continued until mid-April 1945. The central event in the fighting in East Prussia was the surrender of Koenigsberg on April 9, 1945.

After the end of the Second World War, on the basis of the decisions of the Yalta and Potsdam conferences, since 1945, a third of the former East Prussia has belonged to the USSR, and from this moment a new stage in the history of the amber region begins.

By decree of the Presidium of the Supreme Soviet of the USSR of April 7, 1946, the Koenigsberg region was formed here, which became part of the RSFSR, and on July 4 its administrative center was renamed Kaliningrad, and the region into Kaliningrad.

A new era has begun in the life of the region...